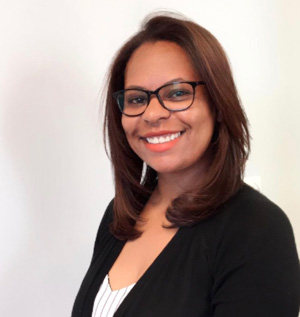 Lenita Reason is the Executive Director (ED) of the Brazilian Worker Center (BWC) in Boston, an immigrant women-led non-profit organization dedicated to defending and advancing immigrants’  labor and human rights. Lenita took office as ED in September 2021, after over 11 years of dedication as a Community Organizer, Office Manager, and OSHA-Susan Harwood Outreach Coordinator at BWC. Lenita’s professional background is diverse, international, and offers a variety of rich perspectives and unique skills: from being a domestic worker, dental assistant, and office administrator in Brazil, to being a private personal care attendant, Outreach Specialist, and Chief Trainer Assistant for the Susan Harwood Targeted Topic Training Program in Fall Protection for Residential Construction, a Brazilian Portuguese Interpreter with the Rapid Response Text Messaging Network for the Mayor’s Office of Language and Communications Access in the City of Boston, to now becoming BWC’s Executive Director. In addition to her diverse professional background, Lenita’s expertise in the field of workers’ rights is also informed by her experience as a Small Claims Court advocate for BWC workers seeking restitution for wage theft, and by her considerable experience as a mediator in worker-employer disputes. Mostly recently, she has completed a Certificate in Labor Studies at the University of Massachusetts Boston in 2018. Lenita is also a seasoned researcher having actively contributed as a field coordinator in various projects, such as the 2014 study, funded by the Sociological Initiatives Foundation, which aimed to investigate working conditions of Massachusetts domestic workers, and the Home Economics: The Invisible and Unregulated World of Domestic Work, which consisted of a participatory action research project that supported the completion of the 2013 National Domestic Workers Alliance study. Finally, Lenita has also actively collaborated for a research study that aimed to investigate health awareness in the Brazilian immigrant community in Massachusetts, a study developed in partnership with UMass Boston, Tufts, Boston University, and the Dana Farber Cancer Institute. In 2014, she co-founded and, since then co-directs, the BWC’s “Building  Justice” innovative worker committee, which monitors and takes action on wage theft cases in the community. In 2020, Lenita became co-chair of the Driving Families Forward coalition, which advocates for the passing of the Work and Family Mobility Act bill in Massachusetts.